Toyota Prius Hybrid Likely To Be Sold In Malaysia 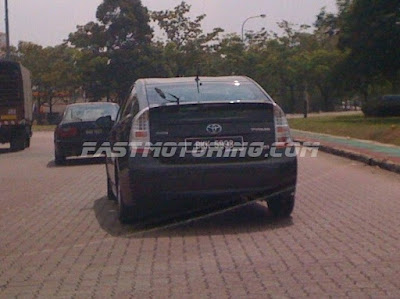 The picture of the above Toyota Prius is taken close to the Toyota HQ in Shah Alam by FastMotoring crew.

There is no solid news to the media whether or not the Toyota Prius will be officially introduced. However, from the sign and signal been seeing the Toyota Prius driving around in Shah Alam for testing and evaluation. I think we can expect the Prius to be launching any time in this year.

Furthermore, the Honda Civic already had been selling their Hybrid model since 2007. However, the Civic Hybrid is running on 1.3 engine while the Prius is running on 1.8 engine. It will be more powerful for sure and I think it will cost a little more than Civic Hybrid. Likely, we can expect the Prius is priced at around RM150k to RM160k, since hybrid cars will entitle on tax exemptions which stated in Malaysia government budget last year.

For our local Toyota fans, some news update for all of you. From our internal source, UMW Toyota is ready to launch the facelift model of Toyota Camry, we can probably expecting in this month (July 2009).