It’s finally here! – The 2013 Toyota Vios was officially launched yesterday in Malaysia. This is the third generation Vios since its first launch in Malaysia in year 2003. This popular model of Toyota in Malaysia is available in 5 variants – Vios J (Manual), Vios J (Auto), Vios E (Auto), Vios G (Auto) and TRD Sportivo (Auto).

All of the 5 variants of the new Toyota Vios are powered by a 1.5litre 1NZ-FE engine 4-cylinder with VVT-i that produces 109PS at 6,000rpm and 141Nm of torque at 4,200rpm. All auto variants comes with a 4-speed Automatic with Super ECT transmission. For manual, it will be as usual – five-speed manual shift. 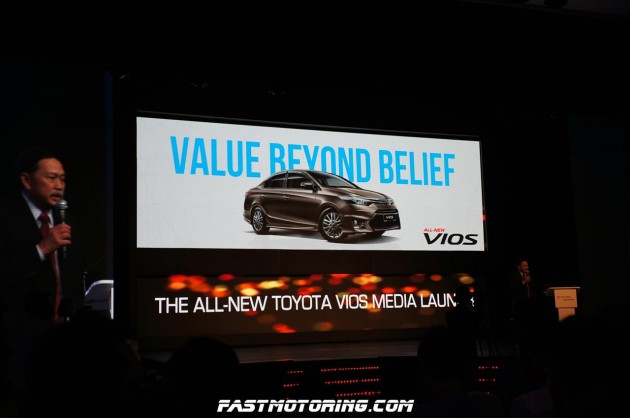 The new Vios is developed with the concept of ‘Value Beyond Belief’. The third-generation Vios will continue to bring customers the same attributes as its predecessors such as: excellent fuel economy, low cost of maintenance, Toyota’s renowned Quality, Durability, and Reliability, and most importantly – great value for money.

Hit the jump for more on this car and also the official pricing.

Although the gearbox and engine of the new Vios aren’t new, Toyota mentioned that the new Vios offers a 5% improvement in fuel consumption over the previous generation. Toyota has adopted the ‘Keen Look’ expression for the front design of the new Vios. This gives a more expressive style with a dynamic look, achieved by having more sculptured 3-dimensional design. The body size of the new Vios is 110mm longer than before while the roofline is also 15mm higher. However, the overall width remains the same as its predecessor, so does the wheelbase of 2550mm. The headlamps for the new Vios have a very distinctive and sharp appearance. To ensure that the beams do not cause unnecessary glare to oncoming cars / motorists, a manually headlamp-levelling adjuster is provided so that the driver can adjust the headlamps angle. The 1.5 Vios TRD Sportivo and the 1.5 Vios G will come with a projector-type headlamp but not for the Vios E and J.

The Vios TRD Sportivo will come with the full set aerokit which includes the front bumper spoiler with daytime running lights, rear bumper spoiler, side skirts and trunk lid spoiler. However, all of the kits are available optional for the rest of the models. On top of the third-generation Vios, Toyota have included a ‘catamaran’ roof to which helps to streamline the airflow over the top of the car, benefitting acceleration and fuel economy. Besides more aerodynamic door mirrors, small aero stabilising fins have also been attached to certain areas to create air vortices that improve the vehicle’s straight-line stability. The drag coefficient has been reduced from 0.29 to 0.28.

The suspension layout consists of independent L-arm MacPherson struts in front and torsion beam rear suspension at the rear. This results to a more linear feel in the steering, better stability at high speeds, reduced body roll and also improved in comfort. The Electronic Power Steering (EPS) system has also been revised to a lightweight compact system. The Toyota engineers have increased the precision of the steering feel so that the driver has a better feel of what the front wheels are doing.

All variants now come with 15-inch lightweight alloy rims. The Vios TRD Sportivo will spot a sporty & dynamic design, Vios G wheels have an elegant design while the Vios E and J will have a sophisticated design which gives the impression of a larger wheel. The all new Vios comes with 5 different exterior colors – Quartz Brown Metallic, Medium Silver Metallic, Silver Metallic, Attidude Black and White. The redesigned dashboard has a centre console which is more 3-dimensional in appearance, appearing to ‘float’ above the dashboard. There are 2 versions of the integrated audio system installed, depending on the variant. (Picture above displays the optional accessory – the DVD-AVN). The DVD-AVN and DVD-AVX system with reverse camera is an option accessory at the time of purchase and it is not included in any of the Vios variants. Smart Entry & Push Start is present for only the TRD Sportivo and Vios 1.5G providing convenience for the driver.

The Vios J and E variants have front disc and rear drum brakes; The Vios G and TRD Sportivo have discs brakes all round. All except Vios J that gets power-folding door mirrors with turn indicator, front fog lamps, 60:40 split folding back seats and a dashboard-integrated audio unit.

The all new Vios fully complies with the current safety regulations in Malaysia – UN ECE R94 and R95 in which it came into effect in mid-2012. These regulations have more stringent demands on collision protection and Toyota’s engineers have ensured that the car’s structure fully meets the legal requirements for passive safety.

In the cabin, SRS airbags are provided for the driver and front passenger in all of the 5 variants. The airbags provide cushioning and protection as the occupants are thrown forward during a severe frontal collision.

As with all locally-assembled models offered by UMW Toyota Motor, the new Vios comes with a 3 year / 100,000kms (whichever comes first) warranty.

The on-the-road pricing, inclusive with insurance (Peninsular Malaysia) for the 2013 Toyota Vios is: