Today, BMW Group Malaysia introduced the latest edition of the world’s most successful premium sedan – the all new BMW 3 Series in Malaysia. It comes in three variants: BMW 320d, BMW 328i and BMW 335i.

“The BMW 3 Series is the best-selling sports sedan in the premium segment that there has ever been with well over 12 million units sold worldwide since the car’s creation in 1975. We are confident that the all new sixth Generation BMW 3 Series will continue to set a higher benchmark in automotive history!” said Mr. Geoffrey Briscoe, Managing Director of BMW Group Malaysia.

Briscoe further added that since its original inception, the BMW 3 Series has led the field in introducing the latest technological capabilities of the BMW Group and that the all new Sixth Generation model would be no different. The predecessor to the new car generated a total sales volume of 10,743 units during its tenure in Malaysia since 2006, 48% of the company’s total sales volume up to when it was discontinued earlier this year.

Briscoe added that the special status of the new BMW 3 Series is also now made even more exclusive with two new BMW Lines of Luxury and Sport which feature specific exterior and interior design as well as equipment elements that give the car unmistakable character and enabling owners to tailor their BMW 3 Series to their preferences and personal lifestyle.

The all new BMW 320d which is set to re-excite drivers in the segment who seek best-in-class power and efficiency in a package that delivers exceptional driving dynamics and excitement showcases a turbocharged 2.0 litre capacity engine that is fitted with variable turbine geometry (VTG), ensuring that the engine’s turbo aspect ratio is maintained at optimum levels. The new diesel variant of the BMW 3 Series also features Common Rail direct injection capable of delivering an output of 135 kW/184 hp with an exceptional 380 Nm torque reading. This enables the new BMW 320d to sprint from 0-100 km/h in 7.6 seconds.

The all new BMW 328i is the replaccement for the former BMW 325i. The new premium compact sedan now features, for the first time, the new 4-cylinder 2.0 litre capacity BMW TwinPower Turbo petrol engine which is fitted with direct injection, Valvetronic and a TwinScroll turbocharger for an output of 180 kW/245 hp and a very respectable 350 Nm torque reading, allowing the car to reach the 0-100km/h sprint in 6.1 seconds.

The segment topping variant – the BMW 335i retains the exceptional 3.0-litre inline 6-cylinder petrol engine with BMW TwinPower Turbo technology, direct injection, Valvetronic and TwinScroll turbocharger for an exceptional output of 225 kW/306 hp and 400 Nm of torque, allowing it to accelerate from 0-100 km/h in 5.5 seconds.

Now, all BMW 3 Series variants are further fitted with BMW’s revolutionary 8-speed automatic transmission, providing drivers with an exceptionally smooth driving experience with seemingly endless infusion of power whilst providing the efficiency to match that of a double-clutch transmission system. The new BMW 335i additionally features Variable Sport Steering, a speed-independent system which changes the steering ratio in line with steering angles. Incorporating a Servotronic function, the system reduces the steering wheel movement needed to achieve a particularly tight steering angle which in turn significantly enhances vehicle agility in tight corners and hairpin bends. For smaller steering angles, the system provides excellent directional stability and a very high degree of steering precision.

An additional new feature being introduced with the Sixth Generation BMW 3 Series is the new intelligent ECO PRO engine management mode as standard. By activating the ECO PRO mode via the Driving Experience Control button, the car’s on-board computer slightly reduces the engines power delivery, air conditioning output as well as other non-essential electric comfort functions. ECO PRO tips shown on the Control Display further provide the driver with hints on how to lower fuel consumption while on the move. The resulting fuel savings from utilising ECO PRO are displayed as bonus kilometres added to the car’s range as well as the total journey’s fuel consumption. Studies by BMW have shown that drivers were able to enjoy fuel savings of up to 20% with the ECO PRO mode.

Like all contemporary BMW vehicles, the all new BMW 3 Series allows customers to fully benefit from the latest innovations in information technology through BMW ConnectedDrive. The full range of driver assistance systems and mobility services – a combination unrivalled in the premium segment of the Malaysian automotive industry is now taken to the next level with BMW ConnectedDrive Apps, an interface system which integrates the cars Video Playback and iPod Plug-In functions allowing customers to have direct access to web radio, Facebook and Twitter directly through their on-board Control Display. BMW ConnectedDrive Apps are enabled in the BMW 328i and the BMW 335i variants.

Specifically in the segment topping BMW 335i is the revolutionary full colour BMW Head-Up Display (HUD) system which projects important data onto the windscreen directly within the drivers’ field of vision much like the system used by jet pilots. 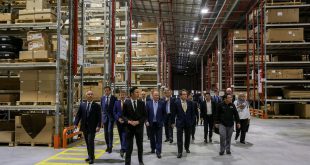