The new Macan entry-level model extends the Porsche compact SUVs line-up. It is now featured with four-cylinder turbo engine, which was specifically tailored to this vehicle – the sports car of the SUV segment. The turbocharged 2.0-litre engine in the Macan delivers 185 kW (252 hp) from 5,000 to 6,800 rpm and comes standard with a 7-speed PDK dual-clutch transmission like all Macans. As a result, the Macan delivers impressive acceleration: It is capable of reaching 100 km/h in 6.7 seconds, and with the optional Sport Chrono-Package, the time is reduced to 6.5 seconds. The top speed is 229 km/h. In terms of fuel consumption, the Macan proves to be very efficient: Depending on the mounted wheel and tire combination, the Macan consumes 7.4 l/100 km to 7.2 l/100 km according to the NEDC.

The in-line four-cylinder engine is designed to be particularly sporty and efficient: It operates with up to two bar of boost pressure, charge-air cooling, petrol direct injection and variable valve timing. VarioCam Plus adapts the intake and exhaust camshaft continually and also controls the lift of the exhaust valves. Its powerful 370 Nm of torque available between 1.600 rpm and 4.500 rpm, for instance, enables fast overtaking maneuvers. As is characteristic for all Porsche models, the Macan is capable of converting its engine power into exceptionally sporty driving dynamics. This is ensured by the standard Porsche Traction Management PTM active all-wheel drive system in interplay with an agile suspension and precise steering. An air suspension system with levelling control including the PASM with adaptive dampers is available as an option. With an unladen weight of 1.770 kilograms, the Macan is the lightest SUV made by Porsche, which translates into agile handling.

Visually, and in its features, the new entry-level model only differs from other more powerful models in its details. At first glance, the new Macan can be clearly made out as a Porsche by its “hovering” four-point LED daytime running lights that are typical of Porsche. The LED headlights with the Porsche Dynamic Light System (PDLS) as an optional feature. Many of the vehicle’s standard features are the same as those in the S models. For example, the Macan has comfort seats with electric 14-way adjustment optional feature, the latest generation of Porsche Communication Management (PCM), a lane-departure warning system and a powered tailgate.

The centrepiece of the new future Porsche Communication Management system (PCM) that will be standard in all new Macan models is a high-resolution seven-inch touchscreen. The redesigned user interface enables operation that is intuitive and smartphone-like. When the proximity sensor detects a user input, relevant menu contents are shown, which the driver can control by multi-touch gestures. Bluetooth, USB and SD card interfaces make it possible to integrate smartphones and memory media. Also new is the option of connecting an iPhone via the PCM to use Apple CarPlay®. The new navigation module is included in the new Macan as standard. It impresses with high-resolution map display and, for the first time, 3D representation in some regions. Navigation can also be conveniently started by voice control.

The price start from MYR 435,000 for Malaysian market. 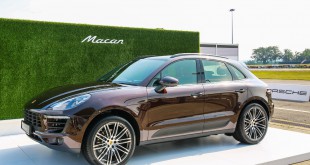