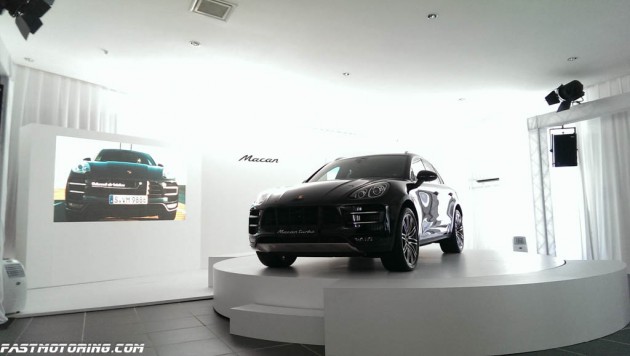 Sime Darby Auto Performance (SDAP) previewed the new Porsche Macan (SUV) last week at Porsche Centre Damansara. The Macan will be officially launched later this year in around Q4 2014. Porsche Macan is a smaller sibling to the Porsche Cayenne and it is marketed as the “first sportscar in the compact SUV segment”. The entry-level Porsche Macan is powered by a 2.0Litre in-line four cylinder turbocharged engine. It produces 237hp and able to achieve 0-100km/h in 6.9 seconds and a top speed of 223 km/h. Fuel consumption of the Macan is 7.2 litres per 100km, making it among the most efficient compact SUV in its class. The top ranging and ultimate Macan would be the Macan Turbo. The Macan Turbo is powered by a 3.6litre V6 biturbo engine. It does 400hp, 0-100km/h in just 4.8seconds. Top speed? Massive 266km/h.  All variants come with a 7-speed dual-clutch PDK gearbox and all-wheel-drive.

The Macan Turbo will be making an appearance at Bangsar Shopping Centre from May 21st to 25th, 2014 for an opportunity to the Malaysian public to have a closer look at Porsche’s fifth model range. The Macan model range is now available for bookings at Porsche Centre Damansara and Porsche Centre Glenmarie.