Probably you have viewed our spy shots of the new Corolla Altis 2.0V in our previous post here. Now are no longer spy shots as the facelifted Toyota Corolla Altis is officially launched on 23 September 2010 at UMW Toyota Subang 3S Centre.

The new Corolla Altis is equipped with newly designed exterior for a more dynamic and sporty look with new headlamps, front grille and rear tail lamps that present a sporty style sedan.  The interior is further enhanced presenting a luxurious image with a combination of leather and wood on the steering and gear knob as well as the perforated leather seats that offers comfort.

The new Corolla Altis is a completely built-up (CBU) unit, manufactured in Thailand and is available in four variants such as the Altis 1.6E, Altis 1.8E, Altis 1.8G and the new variant – Altis 2.0V. The 1.8-litre and 2.0-litre variants now fitted with Super CVT-i gearbox while the 1.6-litre remain using the same 4-speed auto gearbox. The Super CVT-i with 7 speed sports sequential shift provides improved fuel efficiency, as well as smooth and responsive gear shifts like the one fitted on Toyota Estima 2.4 ACR50 and Toyota Vellfire 2.4.

The previous ZZ series of VVT-i engines have been replaced by the ZR series with Dual VVT-i across all variants of the Corolla Altis. Therefore, now the 1.6-litre and 1.8-litre engine have gained more horsepower with the new Dual VVT-i engine.

With the advantage of torque at low rpm, the 2.0V gives good performance on the road compare to other car at the same segment.

Apart from the 1.6E and 1.8E/G variants, the 2.0V gets a single bar grille in dark grey and HID headlamps with smoked lenses. Interior-wise, it comes with dark-coloured wood trim with matte finishing on 1.8G and 2.0V.

The new car is priced between RM106,000 to RM132,000 (OTR in Peninsular Malaysia including insurance). The new Corolla Altis can be view at all Toyota showrooms throughout Peninsular Malaysia since 24th September 2010 while in Sabah and Sarawak on the 1st October 2010.

Check out the photo gallery of the new Corolla Altis after the jump! 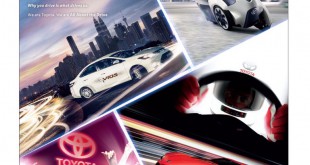