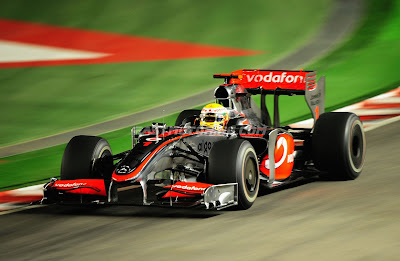 The bumps, the dust, the artificial lights make up the night race of the Singapore Grand Prix.

Lewis Hamilton won Sunday’s FORMULA 1â„¢ SingTel Singapore Grand Prix for McLaren-Mercedes and promptly paid tribute to the Marina Bay Street Circuit on which the 12th victory of his career was earned.

Second, matching the best performance of his F1 career to date, was Germany’s Timo Glock for Toyota, while Fernando Alonso – race-winner in the Lion City last year – produced an upbeat ending to a difficult weekend for Renault with third place, the team’s first podium finish of the season.

Although Sebastian Vettel was fourth for Red Bull, the World Championship fight tilted significantly back towards the Brawn GP team, for whom Jenson Button and Rubens Barrichello finished fifth and sixth respectively, while Vettel’s team-mate Mark Webber crashed out with suspected brake failure after 45 laps and failed to score a point for the fourth consecutive race.

Brawn now have 153 points to Red Bull Racing’s 110.5 with just 54 to fight for in the final three races of the year, and Button’s hopes of a first Drivers’ World Championship look even stronger as the Englishman leads his Brazilian team-mate by 15.