At Auto China 2014 in Beijing, no less than four vehicles are at the centre of Volkswagen’s show booth. In addition to the world premiere of the facelift Touareg, Volkswagen presents three concept cars to the Chinese market: the extremely sporty Golf R 400, the dynamically- designed New Midsize Coupé and the Golf Edition on the occasion of the 40th anniversary of the Golf. The Touareg is one of the most-successful upper class SUVs in the world, with over 720,000 units sold. In a world premiere, Volkswagen is now presenting the updated version of the Touareg at Auto China in Beijing. The new generation can be visually identified by dynamically-styled front and rear sections as well as fresh colours and wheels. The V6 TDI version now offers a coast function in addition to bi-xenon headlights. In combination with the RNS 850 radio/navigation system and a mobile telephone connection, drivers of the Touareg can now use mobile online services in Europe. The new Touareg version will be launched in the German market in autumn – as a diesel (TDI) and as a hybrid (TSI plus electric motor). The name of the Golf R 400 says it all: The extremely sporty car, developed by Volkswagen R GmbH, shows its power in its name – 400 PS (294 kW). Powered by a 2.0 TSI engine, whose technical genes stem from the Polo WRC racing engine, the Golf is catapulted from zero to 100 km/h in 3.9 seconds. The top speed is 280 km/h, and the maximum torque of 450 Newton metres is available starting at 2,400 rpm. The extremely dynamic Golf R 400 is perfect in every detail: its engine, its permanent 4-wheel-drive system 4MOTION and its sport suspension, as well as its body that has been redesigned to a large extent. The Golf R 400 is painted in “Silver Flake”, which is contrasted by the roof in glossy black and mirror caps in real carbon fibre.

The way to the future is shown by a four-door coupé unlike any other in its class – the New Midsize Coupé (NMC) concept car. Volkswagen will show the car in Beijing, combining the worlds of saloon and sports cars. The NMC brings together all the components of a perfect coupé design. The low (1,422 mm) and wide (1,838 mm) body provides for a low centre of gravity. At the same time, the lines of the long bonnet reach over the powerful roof line to the concise C pillar with a short boot to form a completely dynamic silhouette.

The concept car is painted in “Dragon Red,” a brilliant red effects paint, establishing a colour contrast to the high-gloss black elements, such as the roof surface with its integrated panoramic sunroof. The front section, with an avant-garde radiator grille, LED headlights with 3D optics and a large lower air inlet with a concise chrome signature feature an exceptionally progressive design. The side view provides the impression of a sports car, with its 20-inch multi-spoke alloy wheels with 245/40 low- profile tyres. 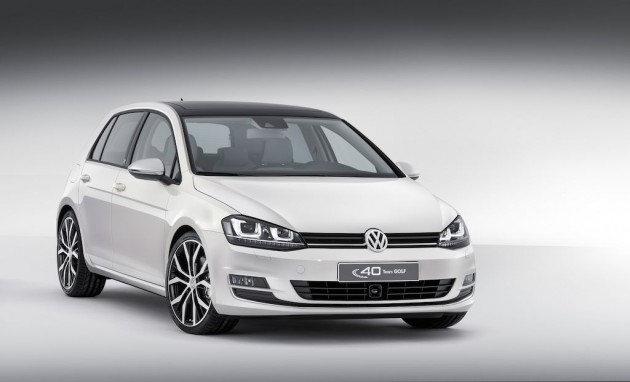 The global success and 40th anniversary of the Golf is celebrated with an exclusive concept car: the Golf Edition. This fascinating concept car is equipped like a luxury limousine, and distinguishes itself by the exclusive colour “Magic Morning” and burnished 19-inch “Madrid” alloy wheels. The metallic paint with a white basic tint stands out by a special golden shimmer that becomes visible at certain viewing angles. The interior of the Golf Edition presents itself in two-tone leather in “St. Tropez” sand colour and black. Further highlights like wood trim in the door panels, sports seats, luxurious diamond quilting seams on the upholstery and a centre console in piano finish underscore the luxurious ambience. The concept car honours the Golf, of which more than 30 million units were sold, making it one of the most successful automobiles of all times.

2011 Scirocco R-Cup will be held in China and Malaysia