This is the future! Toyota has just revealed the all-new Toyota RAV4 electric vehicle at the 26th annual Electric Vehicle Symposium in Los Angeles. The Toyota RAV4 EV has an expected driving range rating of approximately 160km and charging time of approximately six hours on a 240V/40A charger.

Accordingly, the Toyota RAV4 EV’s driving performance, dynamics and cargo capacity are equal to or exceed the petrol-powered RAV4 V6. Just like the Nissan Leaf claimed that its driving experience and performance is close to power of 3.5-litre V6 engine.

The RAV4 EV is the product of a unique collaboration with Tesla Motors spurred by Akio Toyoda, president and CEO of Toyota Motor Corporation.  It is about 22 months after the project announcement, Toyota and Tesla engineers have succeeded in bringing the vehicle to market.

The RAV4 EV combines a Tesla designed and produced battery and electric powertrain with Toyota’s popular SUV. The front-wheel-drive RAV4 EV allows drivers to select from two distinctly different drive modes, Sport and Normal. In Sport mode, the vehicle reaches 60 mph (96.6 km/h) in just 7.0 seconds and has a maximum speed of 160 km/h. Normal mode achieves 0-60 mph in 8.6 seconds with a maximum speed of about 137 km/h (85mph). Maximum output from the electric powertrain is 115kW @ 2,800 rpm.

Compared with the petrol-powered RAV4, Toyota re-styled the front bumper, upper and lower grille, side mirrors, rear spoiler and under body design to provide optimum air flow around the vehicle. The RAV4 EV’s battery pack is mounted low and to the centre of the vehicle, contributing to a more sedan-like ride.

The vehicle will go on sale in the United States late in coming summer. 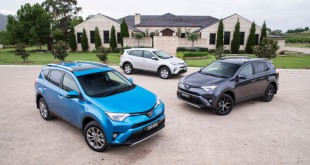