Ford has revealed its production ready, Ford Fiesta ST in Geneva 2012. What’s so special about the ST version it’s has been fitted with a 1.6L Ecoboost inline-4 engine that pumping out 180ps with 240Nm of torque. To give you a better picture of that, the power is similar to the Volkswagen Polo GTI which basically has 10Nm of torque more. Just like the VW Polo GTI, the Ford Fiesta ST will do 0-100km/h in less than 7 seconds. Unlike the VW, the American automaker fitted the Fiesta ST with a 6 speed manual gear box instead. The top speed stands at 220km/h.

The Ford Fiesta looks great as well, inside & outside. The front headlamp is equipped with daylight LED, a meaner front fascia. The car comes standard with a set of twin tailpipe on the rear with a diffuser at the bumper and some tweak on the rear lights. Also notice, there’s some red calliper on the disc brakes. Inside, there will be a pair of sports semi bucket seats in leather with red stitching plus a nice ST steering wheel. Not to forget Ford SYNC infotainment system with voice control.

The Ford Fiesta ST will obviously look & handles in a sportier manner. The car is developed by the Ford’s RS team. The suspension of the car is lowered by 15mm lower from standard. Ford will fit the Fiesta ST with the enhance Torque Vectoring control system and 3 different Electronic Stability modes. Accordingly, the car was tested on the Nürburgring race track as well. Hence, I think the ride will be stiff and harsh!

With all the high tech technologies to handles the engine delivers the power to the front wheel driven Ford Fiesta ST. We will believe it will be Ford’s answer to the VW Polo GTI. 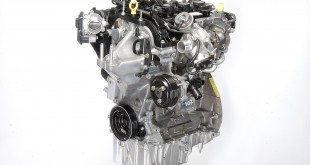