Nissan LEAF is a zero-emission vehicle that emits no CO2 while it is being driven. With optimally-placed lithium-ion batteries, a high-performance electric motor as well as advanced control technologies, Nissan LEAF achieves strong and smooth acceleration performance, excellent quietness, outstanding riding comfort and superb handling stability. Comfortable and fun driving is enhanced by a dedicated on-board IT system that can be accessed by remote control via mobile phones. Nissan LEAF will also be able to supply electricity to houses via its high-capacity lithium-ion batteries. The Nissan LEAF offers new mobility value as the world shifts toward a sustainable zero-emission society, not only as a means of transportation, but also as an element of social infrastructure on account of its ability to store electricity.

“We have sold 20,000 Nissan LEAFs and also delivered on our promise of affordable, zero-emission mobility on a global scale. This award is as much a win for Nissan as it is for our customers,” said Nissan President and CEO Carlos Ghosn. “All these accolades show that zero-emission vehicles can clearly be competitive alternatives to conventional ones.” 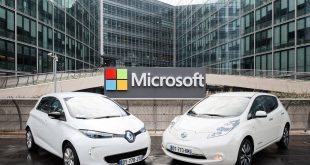