For many decades, Toyota had visibly gained a well reputation for exceptional sturdiness and reliability on its Land Cruiser and Hilux pickup truck (including in the recent Libya conflict).

The Hilux had well proven on our common civilians’ road and heavy use plus abuse at war field as a type of improvised fighting vehicle to provide mobility for rebels and insurgent groups especially in Third World conflicts. Commonly, the open cabin of the Toyota Hilux will be mounted with machine gun, light anti-aircraft gun, recoilless rifle, or other support weapon.

According to an article report, a former British special forces soldier, which he refers the Hilux to as “the technical,” in both Iraq and Afghanistan. He said, “You can’t underestimate the value of having a vehicle that is fast, will never break down, and is strong enough to mount a heavy weapon in the back.”

Moreover, an experiment conducted by BBC TV show Top Gear in 2006 offers one explanation. The show’s producers bought an 18-year-old Hilux diesel with 190,000 miles on the odometer for $1,500. They then crashed it into a tree, submerged it in the ocean for five hours, dropped it from about 10 feet, tried to crush it under an RV, drove it through a portable building, hit it with a wrecking ball, and set it on fire. Finally they placed it on top of a 240-foot tower block that was then destroyed in a controlled demolition. When they dug it out of the rubble, all it took to get it running again was hammers, wrenches, and WD-40 without a need of any spare parts.

How on earth that Toyota can design such a vehicle that is so versatile and reliable for civilians and the rebels? I am speechless now. Toyota Hilux – “what a war machine”. 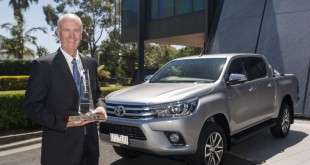