Recently from a report, Porsche delivered significantly more cars to customers worldwide in June 2011. Deliveries increased by 29.5% compared with the same month the year before to reach 10,677 vehicles. The sports car manufacturer delivered a total of 60,659 new vehicles in the first half of the year, 36.8% more than from January to June the year before. Bernhard Maier, Porsche AG Board of Management Member for Sales and Marketing, signalled his satisfaction with developments: We managed to increase our deliveries significantly again in June. This is accompanied by better-than-expected sales figures. The significant increase in new vehicle orders, especially for our front-engined sports cars, Cayenne and Panamera, also gives grounds for anticipating good sales figures in the coming months.

In June 2011 Porsche managed to grow in almost every region worldwide. The response from Chinese customers was again especially strong: Deliveries more than quadrupled to 2,423 compared with the same month the year before. The most successful model apart from the Cayenne off-road vehicle was the Panamera. With 2,546 vehicles Porsche announced growth of 18.9% for the USA in June 2011. In the home market, the sports car manufacturer delivered 1,344 vehicles in June, broadly in line with the same month the year before. The diesel version of the Cayenne was especially popular. On the other hand weaker sales in a number of European markets such as Great Britain, the Netherlands or Austria translated into a 6.5% Europe-wide decline in customer deliveries in June. On the other hand, the Russian market showed a significant increase last month with 63.6% to reach 216 vehicles.

Strong demand remained on Cayenne. In June alone the Cayenne sold 4,994 of the sporty off-road vehicles, 69.2% more than in the same month the year before. First half-year deliveries almost doubled to 30,055 compared with the same period the previous year. This included more than 2,000 Cayenne S Hybrid, making Porsche the global market leader for hybrid off-road vehicles. In June the Zuffenhausen company sold 2,318 Panameras, 14.1% more of the sporty saloons than in the same month the year before. The sports car model lines also slightly exceeded their previous year’s level in the reporting month. 2,015 vehicles of the 911 model line were delivered – up by 1%. With 1,350 vehicles delivered, the Boxster model line, which also includes the Cayman, posted growth of 6.5% compared with the same month the year before.

Porsche boosts revenue and profit by 25 per cent 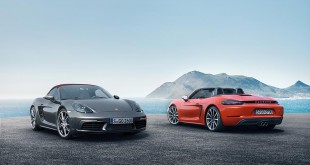