During KLIMS 2010, Honda Malaysia displayed an Australia Spec FN2 Civic Euro Type R as one of the show car. Since the legendary FD2 Type R had discontinued early this year, the FN2 Type R is the only Type R left in Production. The FN2 Type-R is only produced at Honda’s Swindon factory in the UK. However, we are unable to confirm whether Honda Malaysia replacing the Type R model with FN2 like what’s happening in Japan.

Although this model has been sometime, we will briefly walk-thru it. The FN2 Civic Euro Type R is offered only as a 3 door hatchback and uses a different chassis and internal layout than JDM FD2 Type R. The rear suspension is on torsion beam axle. This car is powered by de-tuned K20A engine with less performance. No Brembo callipers on the front brake. It runs on 225/40 R18 Y88 Bridgestone Potenza RE050A tyres as standard. Most importantly, the car is RON95 compatible (part of the reasons lead to less performance) due to Euro Spec.

The upholstery looks similar to JDM FD2 Type R, but the material used are not full Alcantara. 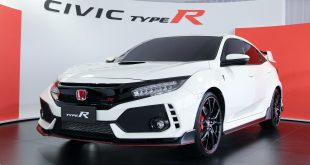