ABT Sportline take on the Mk-6 Volkswagen Golf GTI

The tuning engineers at ABT Sportsline’s developed two performance kits for the new GTI with option of 260hp and 300hp.

For the first kit, ABT adding the usual ECU and exhaust system upgrades that lift output to 260 horsepower. 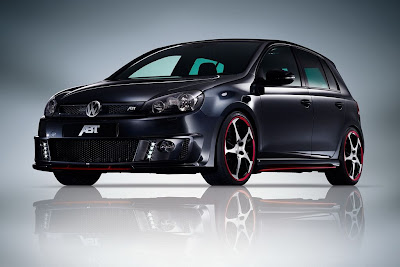 In addition to these enhancements, the second kit adds a new turbocharger that helps boost power to 300HP allowing the car to accelerate from rest to 100km/h in under 6.0 seconds. In comparison, the factory Golf GTI VI sprints from 0 to 100km/h in 7.2 seconds.

Helping to improve the GTI’s handling is a set of lower, stiffer springs plus a high-performance brake system and newly designed 18 or 19 inch alloys.

ABT also developed an appearance package for the GTI that takes the red pin stripe theme to a new level. The kit consists of a new grille, front bumper with LED daytime lights and a lip spoiler, side skirts, roof spoiler and a rear diffuser.

For interior dressing, ABT upgraded the GTI’s interior with red accents on the steering wheel, the instrument gauges the dashboard and the door trims.

There is no pricing indication for comprehensive sport package from ABT, however ABT mentioned that they will announced at a later date.