The Campaign was launched in 1 September 2014 and ran till 31 October 2014. For this round, six (6) lucky customers stood a chance to win an upgraded model with every purchase of a Nissan selected models. With more than a total of RM888,888 in prize value, the Nissan models up for grabs were the All-New Teana 2.0XE, All-New Teana 2.5XV , All-New Sylphy 1.8E, and Serena S-Hybrid.

Throughout the month of December, key handover ceremonies were held at respective showrooms in the states of Melaka, Kedah, Sabah, Penang, Sarawak, and in Kuala Lumpur, to present the winners with their additional new Nissan cars. 37-year old Arnizah binti Kasbulah, a self-employed preschool teacher from Kota Kinabalu, was delighted and could not believe her luck. “My first choice was the Nissan Almera, but after surveying the market, I purchased the Nissan Sylphy as it is more suitable for my needs. As a first-time Nissan Owner, I am very happy with my Sylphy and appreciative towards Edaran Tan Chong Motor for this once-in-a-life time opportunity of winning a free car.” After purchasing the Nissan Serena S-Hybrid, 26-year old On Keur Li, was thrilled beyond words when she found out she had won the Nissan Teana 2.5XV. “I had always dreamt of having a 7-seater MPV, and fell for the Serena S-Hybrid because it was a hybrid car, that provided practicality and comfort. And now I have an additional Teana which is such a premium car. I am very pleased that ETCM came out with a great campaign such as this for customers.” 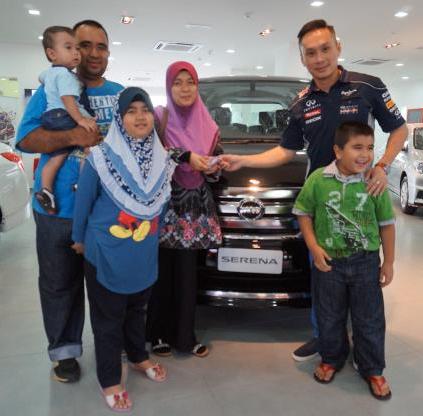 It was a case of double happiness for Aidasuzana Binti Md Arshad who not only won a Serena S-Hybrid, but is also expecting her fourth child. “The only reason I bought the Grand Livina is because its specifications and space fits my growing family. Thanks to Edaran Tan Chong Motor, I now have an even bigger car, with the price of one!” said the first-time Nissan owner from Jitra.

“On behalf of Edaran Tan Chong Motor Sdn Bhd, I would like to extend our warmest congratulations to the Round 1 winners of The Great Nissan Buy 1 Win 1 Campaign,” said Mr Tan Keng Meng, Director of Product Planning and Marketing of ETCM. “This campaign has received overwhelming response, and it was very exciting for us to be able to give more to our customers and to see the joy on the faces of the winners upon receiving the keys to their brand-new prizes. We also look forward to be able to announce winners of Round 2, which will happen very soon – so good luck to all participants!”
Round 2 of The Great Nissan Buy 1 Win 1 Campaign ended on 31 December 2014, and winners will be notified at the end of January 2015.