BMW Malaysia Sdn Bhd says the government’s decision to implement EURO 4M specification for petrol and diesel by 2011 is “encouraging and proactive” to further promote clean and sustainable TECHNOLOGY in the Malaysian automotive industry.

Its managing director Geoffrey Briscoe said BMW Malaysia welcomed the decision to implement the specification, which was highlighted in the latest review of the National Automotive Policy (NAP).

“We see this move as an encouraging and proactive measure by the government to further promote clean and sustainable technology in the Malaysian automotive industry,” he said in a statement released on Wednesday, Oct 28.

The revised NAP, announced on Wednesday, set a clear roadmap for implementing fuel standards. Since September 2009, EURO 2M specification for petrol and diesel has been implemented and this was the latest step to implement the specification by 2011.

Following the announcement, the Ministry of Natural Resources and Environment will establish a roadmap for fuel standards and quality, under the NAP.

Commenting on the latest development in the NAP, Briscoe said the perspective clean and sustainable technology was very much shared by BMW Malaysia and this was demonstrated when it introduced BMW EfficientDynamics to Malaysian market.

“As a way of firmly localising efficient dynamics in Malaysia, BMW is paying particular attention to diesel technology. Diesel technology provide 75% more power  but what is more impressive is that diesel Technology utilises 25% less fuel and emits 20% less carbon dioxide (CO2) which is better for the environment,” he said.

This was demonstrated by the latest BMW EfficientDynamics cars which were able to travel more than 1,000km on a single tank of fuel with an average CO2 emission rate of 170g per kilometre.

For the everyday person, this means that for every six days of travel time to their work place, two days can be considered free of fuel cost. More importantly, however, is the break the environment is getting. 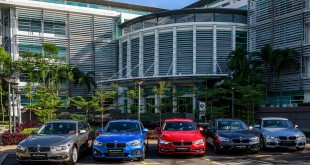