The Super GT car is displayed at Kuala Lumpur International Airport (KLIA) in conjunction with the Super GT 2009 Championship Series this weekend. 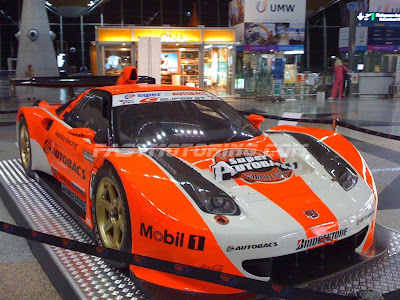 A1 Team Ireland driver Ralph Firman, 34 years old, joined Team Honda Racing in 2005. Firman raced in Japan for six years before progressing to Formula One with Jordan grand Prix in 2003. His victories include winning the 2002 Japanese Formula Nippon Championship. He has been a consistent points-scorer throughout his past 15 years of racing.

Takuya Izawa joined ARTA Project to fill-up their driver’s line-up since 2008 Super GT series when he is 23 years old and he is from Tokyo. After competing in racing karts, he graduated from the Suzuka Circuit Racing School. Then, in ’03, he took his career to Formula Renault in Germany and Formula Dream. He competed in All-Japan F3 Championship in ’06 and ’07 and won 2 races. For ’08 season, he will also compete in Formula Nippon driving for ARTA. Izawa is a young hope for both Honda and ARTA.