Running in sunny, cool conditions, Seton battled with other front-runners including second placed Will Brown from Toowoomba, and Sydney-sider David Sieders who filled the third step of the podium.

Aaron said he was thrilled to conquer the challenging 6.2km track at his first attempt, heading a huge field of 39 cars for a breakthrough T86RS win after several podium finishes.

“It’s awesome to get my first T86RS win here at Bathurst, and I can’t wait for this afternoon’s race,” Aaron said.

“With Will Brown next to me on the front row for race two, it’s bound to be close,” he said.

Toyota is inviting a range of selected racers to join the field in 2016, encouraging them to share their experience and insights with regular competitors. 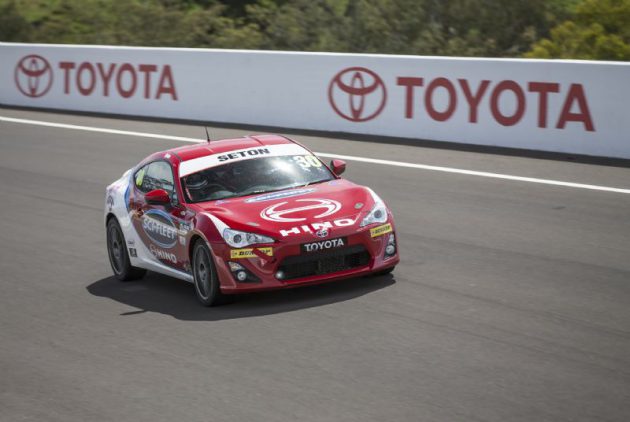 In his third T86RS event Johnson was mixing it with the leaders to finish seventh and says he enjoyed a good race.

“Everyone’s done a really good job so far this weekend, and I had a good battle with [Canberra competitor] Cam Hill and Gricey [Ben Grice, son of two-time Bathurst 1000 winner Allan],” Steve said.

“I’m mindful of racing them clean and hard, but I’m also mindful that it’s their championship. So I’m not taking too many risks,” he said

The second of three T86RS races to be held this weekend is scheduled to start at 12:30pm today, with the third and final run set down for 7:30am tomorrow (Sunday October 9) as a curtain-raiser to the Supercars ‘Great Race.’